Up in Smoke: The New Cannabis Act 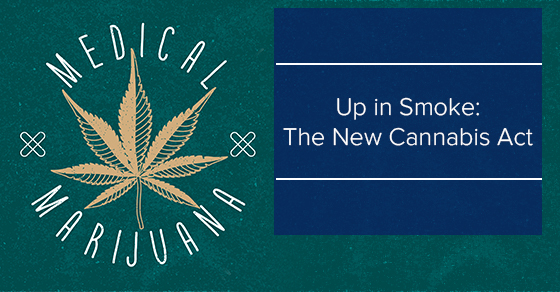 Prior to his election in 2015, Justin Trudeau’s Liberal platform was marked by the promise to legalize, regulate, and restrict access to marijuana across Canada. Canada’s current system, as it was then did not work.

Before Justin Trudeau came to power in 2015 on a promise to legalize marijuana, the laws designed to prevent drug use had proved to be a costly and abject failure. The marijuana prohibition didn’t seem to be preventing young people from accessing and using marijuana. The costs of arresting and prosecuting Canadians for relatively minor possession offences was an expensive strain on the already limited resources of our criminal justice system. A record amount of Canadians were held back by old criminal records for possessing relatively small amounts of marijuana, a minor and non-violent offence. Organized crime was making huge profits from illegal production and sale of marijuana.

Something had to be done, but it was not as simple as just making pot legal. Legalization for use by responsible adults had to, like alcohol, be paired with regulations to restrict access to those who had the maturity and/or the medical need to consume responsibly, while cutting out organized crime.

The liberal platform’s pitch to legalize the recreational use of marijuana was an important factor in the election of Justin Trudeau as Canada’s 23rd Prime Minister. After his election, Trudeau took significant steps to make good on his promise. A Task Force on Marijuana Legalization and Regulation authored a 106-page report released to the public, offering recommendations for the proposed legalization. The Task Force on Marijuana Legalization and Regulation was a catalyst for the creation of Bill C-45, better known as the Cannabis Act, which came into full-fledged force on October 17, 2018.

What Are the Main Purposes of the Cannabis Act?

The Cannabis Act works to protect public health and safety through the legalization, regulation and restriction of access to marijuana. The Cannabis Act achieves seven principal purposes:

(1)   Protecting young people by restricting their access to cannabis;
(2)   Protecting people from inducements or incentives to use marijuana;
(3)   Providing for the safe production of cannabis to reduce the illicit and unsafe production;
(4)   Deterring illicit activities through sanctions and enforcement through the Cannabis Act;
(5)   Reducing the financial burden on the criminal justice system to prosecute offences in relation to cannabis;
(6)   Providing access to safe, quality-controlled cannabis; and
(7)   Promoting and enhancing the public’s awareness about the safe use and health risks associated with cannabis.

How Much Cannabis Can One Legally Possess?

Section 8 of the Cannabis Act prohibits the following possession of:

Cannabis is “illicit” when it is distributed, produced or sold by a person who is prohibited from doing so under the Cannabis Act. Provincially-licensed retailers, such as the Ontario Cannabis Store sell dried and fresh cannabis, as well as cannabis oil to adults. In some provinces that do not yet have a regulated retail framework, individuals can legally purchase cannabis from federally-licensed producers online.

How Old Do You Have to Be To Consume Marijuana?

An adult is a person who is 18 year of age or older. This is an important distinction from the age restriction for alcohol consumption and purchase, which is 19 year of age in Ontario. An adult can therefore legally possess and share (with other adults) up to 30 grams of dried cannabis (or its equivalent).

The Cannabis Act sets out equivalency amounts for cannabis in its different forms, as variations affect weight and size. The possession limits are based on the weight of dried cannabis. It’s very important to know what the type of cannabis product is because it will invariably affect its weight, which could put an individual over or under the legal possession limit, even by a nominal amount.

Pursuant to subsection 9(1) of the Cannabis Act, distribution is an offence in certain circumstances. “Distribution” means to administer, give, transfer, transport, send, deliver, provide, offer, or otherwise, whether directly or indirectly, make available in any manner marijuana.

The Cannabis Act does not affect access for those who use medical cannabis that is validly authorized from a healthcare provider. Any class of persons can be exempted from any or all provisions of the Cannabis Act or regulations by the Minister. Such grounds for exemption include those that are necessary for medical or scientific purposes, and are in the public interest.

All of these provisions are new and are slowly being tested and adapted across the country by governments, law enforcement, and the courts. Canada is now at the forefront of countries seeking to balance the recreational desires of the community, with public safety and a more fair and cost-effective approach to regulation.

For a snapshot of how marijuana and the new law works in Canada, see our blog “Pot By Numbers: Significant Digits on Cannabis”, by Nick Kandel, click here.

Cassy Beaulac is a recent graduate of the University of Windsor Law School
Arun S. Maini is a criminal lawyer and former prosecutor with over 20 years of experience.