The Charter: Search and Seizure (Part 2) 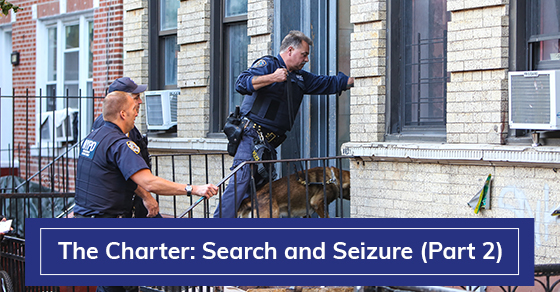 What is a Search Warrant?

A search warrant is a court order issued by a Judge or Justice of the Peace. It authorizes agents of law enforcement (police or other government investigators) to access a private place, to search that location, and to seize evidence of an offence.

A search warrant permits the government to intrude upon a person’s reasonable expectation of privacy, a legal concept discussed in our last blog.

In other words, a search warrant is a tool which assists in the search for evidence, to help law enforcement in detecting, investigating and prosecuting criminal and regulatory offences. 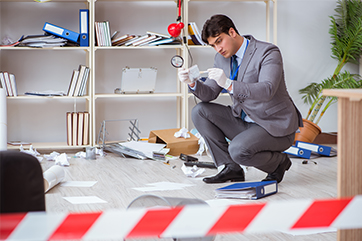 Are There Different Kinds of Search Warrants?

Yes. There are various types of warrants, depending on the type of evidence sought, and the type of search needed to obtain that evidence.

A standard search warrant authorizes entry into a place, such as a home or office, but also into an object, such as a car or computer. These searches tend to be a one-off event on a particular date and time.

A general warrant authorizes certain types of government action that are necessary in an investigation but are often broader than a one-time search in one location. For example, the installation of a tracking device on a car, and the monitoring of that car’s movements over time, require a general warrant. Installing a listening device is another example of when a general warrant will be required.

A DNA warrant authorizes the seizure of a blood or saliva sample from an individual, to compare it to DNA found at a crime scene or on a victim, such as in a sexual assault or homicide.

A wiretap order, known more formally as an order authorizing the interception of private communications, allows the government to access private communications by telephone or text message, or even between persons by way of a listening device. An assistance order often accompanies a wiretap order, and it is often intended to prevent a person or agency from thwarting the secret nature of the exercise. For example, an assistance order to a telephone company can prohibit the company from notifying the customer that their phone is being tapped, or require that an alarm company disable a customer’s alarm system while the police are entering the home to execute a warrant.

How Does Law Enforcement Get a Warrant?

In order to obtain a warrant, the police, or other government agency seeking the order, must provide detailed information to a Judge or Justice of the Peace. That information outlines the investigation in detail, and explains why the warrant is necessary. Usually the reason is that it is the only way to obtain the evidence necessary for the investigation of the offence. The document which sets out these details is called an Information to Obtain a Search Warrant, often referred to by its acronym, an “ITO” (Information to Obtain). An ITO is a sworn document, a form of affidavit.

The police need to have reasonable and probable grounds, also known by its abbreviation “RPG” to believe that an offence has been committed, and that the search warrant being sought will afford evidence of that offence.

In a future case brought by the prosecution, it will be necessary for the defence to ascertain whether the police or government investigator had sufficient grounds to obtain the warrant, and whether they followed proper procedure in obtaining it. But until then, the process remains secret, to preserve the integrity of the investigation. A request for a search warrant is therefore often accompanied by a request for a sealing order, which keeps the order and its related information secret, until such time as it is unsealed for disclosure to the defence in a court case.

Because the process for obtaining a search warrant is a secret one, conducted by the government against an individual person or organization, there are strict rules requiring that the person seeking the warrant, known as the “affiant”, to be completely truthful, accurate and complete to the court. That is why the ITO is sworn under oath. Any lack of candour or transparency by the affiant or the agency seeking the warrant may be grounds to invalidate the search and any evidence obtained from that search.

What are Reasonable and Probable Grounds?

This spectrum of belief runs from mere suspicion at the lower end, to certainty at the other end. Reasonable and probable grounds lies in between these two. As a measure of belief, suspicion equates to the possibility that a crime has been committed, for example, or that this particular person committed the offence. Reasonable and probable grounds, as the name implies, requires a higher level of belief, one of probability. Probability is closer to 50% certainty, at the mid-level of belief. A higher level of belief, closer to certainty, is the level of proof required to convict someone of a criminal offence: proof beyond a reasonable doubt.

For an investigator to establish the reasonable and probable grounds necessary to obtain a warrant, the level of belief requires not only that it rise to the level of probability, but that this probability be “reasonable”.

What does Reasonable Probability Mean?

For grounds to be not only probable, but reasonable, requires the application by the court of logic and common sense. It is not limited to the investigator’s personal subjective view. It requires that this view be objectively reasonable, by examining the totality of the circumstances that form that belief. This is referred to as “credibly-based probability”.

Credibility-based probability involves a practical and common-sense assessment of the totality of the circumstances. The assessment of the “totality of the circumstances” avoids concentrating on individual pieces of evidence. The officer must consider all of the context, including issues of timing, events leading up to the request for a warrant, and various dynamics at play. “Reasonable and probable grounds” will mean different things in different contexts, thus courts must be flexible in interpreting the facts that led an officer to seek a warrant.

The final determination of whether an investigator had the necessary reasonable and probable grounds to obtain a warrant is only made much later, often as part of a trial following the completion of the investigation, the laying of charges, and a detailed court process.

In our next blogs, we will examine these and other issues related to search in seizure, such as:

Rudrakshi Chakrabarti is a student at Windsor Law School