Did Trump Obstruct Justice? The Mueller Report is (Finally) Complete 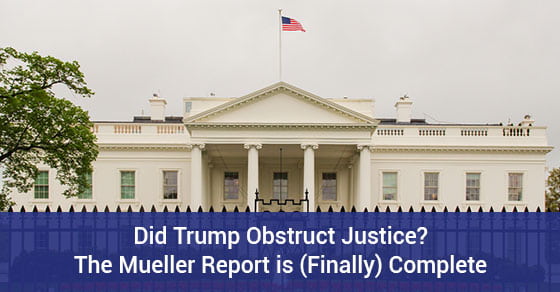 Did Trump get away with it? Or was the process a witch hunt, as Trump claims? Why did special counsel Robert Mueller leave unresolved the issue of “obstruction of justice”? And was it unfair for Attorney-General William Barr, a Trump appointee, to be the one to make the final call about the obstruction allegation?

Well, after two turbulent years of angry accusations, speculation, and political posturing, we are finally here. The investigation by special counsel Robert Mueller is over. No more indictments will be filed, which is a certainly a relief for president Trump and his inner circle. But the political fallout is just beginning, with the president lashing out angrily at what he feels has now been proven to be an unsubstantiated witch-hunt, and his opponents claiming that there is much more to be uncovered, starting with the rest of the Mueller report itself.

The politics will continue well into the next election. But what about the criminal investigation against Trump?

For all intents and purposes, Trump has been cleared of criminal wrongdoing. The reason that the special counsel was appointed in the first place was to determine whether Trump or his campaign colluded with Russia to swing the 2016 election in his favour. Despite the inappropriate contacts with Russian officials and agents; the amateurish and sleazy behaviour of many of his campaign aides and close associates; and the lies many of them told to Congress and the FBI about their involvement, Mueller and his team did not find sufficient evidence to make a criminal case against the president or his team.

As for the claim of obstruction of justice relating to the firing of FBI director James Comey, Mueller left the issue unresolved. He stated that the president was not exonerated, but did not have sufficient evidence to make a criminal case against him either. So he left it to the Justice Department and Congress to decide the issue.

The Justice Department, specifically Attorney-General William Barr (appointed by Trump), and Deputy A-G Rod Rosenstein (who appointed special counsel Mueller) reviewed the Mueller report, and concluded that the obstruction of justice allegation was not made out.

But was that fair? The AG is a Trump appointee.

And why did Muller not make the decision himself?

The politicians and media pundits, and later the historians, will argue about this forever. But from the point of view of a criminal defence lawyer and former prosecutor, my view is this: