The Mule: Drug Smuggling and the Elderly 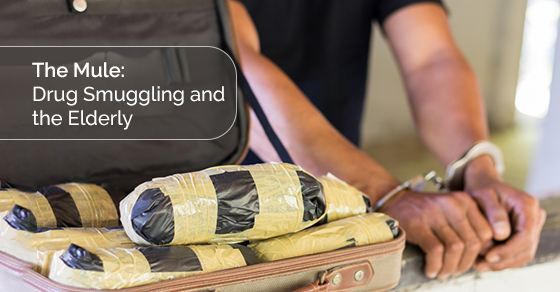 No one suspected him. He was a cranky old man and war veteran going about his business- growing flowers! But behind this façade of ordinary life, Leo Sharp (played by Clint Eastwood in the new movie “The Mule”) became one of the most prolific drug couriers of the modern era. He smuggled over $3 million dollars worth of cocaine on behalf of a Mexican cartel before being caught.

How did he manage to remain undetected for so long?

Arun S. Maini, a criminal defence lawyer and former federal prosecutor, has seen many versions of this story. He was interviewed recently about this phenomenon on CBC radio.

Smugglers are always looking for new ways to avoid detection. Whether the contraband is drugs, diamonds, ivory tusks, or even people, the cat-and-mouse game between traffickers and law enforcement has gone on for centuries. As long as there is money to be made, count on human ingenuity to find a way to transport illegal goods to market.

Narcotics traffickers seeking to smuggle drugs across the border (between Mexico and the US for example, or through an international airport) will use any method available to them, from shipping containers to vehicles to human couriers. Typically, a human courier will bring smaller amounts of drugs across the border in cars or trucks; in luggage, or transported on (or inside) their bodies.

Who are these drug couriers? Mostly, they are young people who are doing it for the money. Some are financially desperate, looking to repay a debt, perhaps to a loan shark or a drug dealer. Sometimes, they do it out of greed, an easy way to make a few bucks to support their spending habits or feed an addiction. Others get tricked into bringing back a suitcase with a false lining, to repay what they thought was a “free” trip to the islands; a few are forced to do so under duress.

Law enforcement looks for signs that might reveal that a traveller may be smuggling contraband. The indicators can be physical, such as nervousness; or circumstantial: a cash ticket bought a short notice, for example. Or the traveller might not fit the profile that a customs or border patrol agent expects: a young female travelling alone to a drug-source country, no previous stamps in her passport.

And as the authorities become more adept at recognizing potential drug couriers, the cartels find more creative ways to smuggle their wares.

The stakes are high, because the profits are enormous. And traffickers can afford to lose shipments of high-value drugs because each load that successfully arrives at its destination yields profits that more than make up for any losses.

Why use senior citizens to smuggle drugs? Young people are often naïve and willing to take risks. But don’t the elderly know better?

As with anyone, even seniors can be lured by greed. More people than ever before head into retirement with debts. Some have a gambling habit or, as we saw in Clint Eastwood’s character, fall victim to a financial disaster. One of the most common situations involves the senior being defrauded. There are so many fraud schemes around nowadays, and senior citizens, especially those who live alone or are socially isolated, are easy targets for scammers pretending to be looking for romance, or playing on the sympathies or fears of the audience.

Once a senior falls victim to a fraud scheme, he is often too embarrassed to admit it to family or friends. If she goes into debt or loses retirement savings, she could become vulnerable for recruitment by a drug trafficker who promises quick cash for little risk. Because it seems so easy, and because they don’t expect to be caught, it can be tempting to go along.

But law enforcement has become aware of these schemes, and they are on the lookout for couriers who do not match the typical profile. And if a senior is caught smuggling drugs, the penalties are severe. The courts will not have much sympathy for a drug mule, even one with a clean record or health problems. For many seniors who take the risk of smuggling drugs, getting caught can mean a life sentence.

What can be done to prevent the targeting of such vulnerable people? Mainly, stay in touch with your elderly loved ones. Be aware of when they might need financial help, and when they might be concealing an embarrassing incident. Talk to them about the risks involved in trusting strangers online. And let them know that fraud can happen to anyone; they should not feel too ashamed or embarrassed to seek help.

Arun S. Maini is a criminal defence lawyer at The Defence Group and a former federal prosecutor. He has a great deal of experience in defending drug cases.