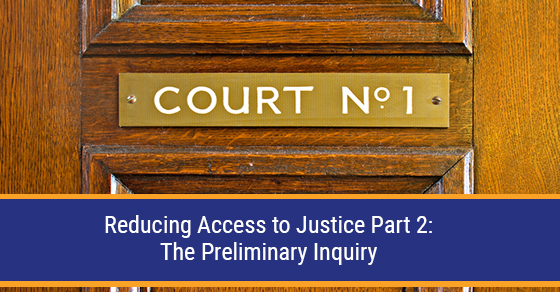 To read part 1 of this series, please click here.

The presumption of innocence is under attack in Canada, and particularly in Ontario. Earlier we looked at the effects of the cuts to the Ontario Legal Aid Plan.

In addition to cutting off the access of lower-income Ontarians to legal representation, the government (this time the federal Liberals in Ottawa) have changed the law to eliminate certain procedural protections. For example, the defence now has to reveal elements of its case to the prosecution in sexual assault cases; peremptory challenges to potential jurors, to seek a balanced jury of one’s peers, has been eliminated. And the topic of today’s blog: the preliminary hearing.

The preliminary hearing is one of the most important and effective tools in the arsenal of the defence lawyer, particularly in credibility cases like sexual assault and domestic assault.

The federal government has now eliminated the ability of a defendant to have a preliminary hearing in all but the most serious cases (like murder). Charged with sexual assault? No preliminary inquiry.

This gutting of procedural protections undermines the presumption of innocence and will result in more wrongful convictions.

What is a Preliminary Inquiry?

Preliminary inquiries are sometimes referred to as preliminary hearings, and are usually heard before a judge of the Ontario Court of Justice. There are two primary purposes for a preliminary inquiry: to ensure that the Crown has sufficient evidence to proceed to trial; and to learn more about the Crown’s case.

The Benefits of A Preliminary Inquiry

From the perspective of a defence lawyer, preliminary inquiries may result in the outright discharge an accused if the Crown cannot meet its evidentiary burden. More importantly, even if the Crown can marshal sufficient evidence, the hearing is a tool for discovery, which provides for a better trial preparation. Contentious trial issues are often narrowed and the trial becomes more focused, saving precious court resources.

Particularly in credibility cases like sexual assault, the preliminary hearing gives the defence an opportunity to question the complainant and to better understand the evidence. Police nowadays in cases of sexual assault and domestic assault rarely conduct an actual investigation: in most cases they simply take a statement from the complainant and go arrest the defendant. A preliminary inquiry allows the defence to ask all the investigative questions that the police usually fail to ask, as well as questions that serve to narrow the issues for trial and to lay the groundwork for pretrial motions.

The Crown also finds the preliminary inquiry helpful as a tool for discovery. Defence counsel may inadvertently reveal their defence and theory of the case. From a Crown’s perspective, the hearing is useful for creating a record which can be introduced later at trial, such as “refreshing” a witness’ memory. The Crown, like the defence counsel, can discover apparent weaknesses in its case previously overlooked or unnoticed. Preliminary inquiries preserve evidence that would otherwise in certain circumstances by unavailable at trial. For example, when a witness has died or is unwilling to testify at trial, evidence taken at the preliminary inquiry may be admissible at the trial.

Both the Crown and defence counsel are interested in facilitating the resolution of a case wherever possible or desirable. The interests of the administration of justice are always better served when a matter can be resolved without a trial, and it is often the case that a preliminary inquiry helps promote this resolution. Even if the case is unable to be resolved prior to trial, preliminary inquiries reduce delay by the “surprise” factor at trial by sorting out issues beforehand.

Why the Preliminary Inquiry Was Eliminated

The federal government has given three reasons for eliminating the preliminary inquiry:

None of these are good reasons, and certainly not reasons sufficient to justify eliminating such an important procedural protection.

Once upon a time, preliminary hearings used up a lot of court time, but legal changes have eliminated much of that problem, and judges now have a lot of power to curtail the length and breadth of preliminary hearings to ensure that they do not become “fishing expeditions”. There is even provision now for “discovery” hearings where a judge is not required, and the Crown and defence can examine witnesses efficiently. By doing away completely with preliminary hearings, the court system is not saving much time. The preliminary hearings that take the most time (murder cases) will still take place. And instead of helping to narrow issues and to resolve cases before trial, eliminating prelims will simply mean more trials and longer trials. So much for saving court time.

Judges have great power to control defence questions, and the law strictly limits what can be asked in sexual assault cases. As a result, the risk of abuse or subjecting the alleged victim of a sexual assault case to further trauma is severely limited. It is simply a myth that the defence is permitted to “beat up” on a complainant. Nowadays the pendulum has swung so far in the opposite direction that it is the defendant who is under attack and risks the trauma of a wrongful conviction. Eliminating preliminary hearings in sexual assault cases does less to reduce trauma and more to increase the chances of such wrongful convictions. In addition, complainants whose cases are weak and were once weeded out rather than subject the complainant to unnecessary questioning are now all heading to trial, without any chance to “put the brakes” on a losing case and avoid further hurt, disappointment, and, as result, further trauma to the alleged victim.

And as mentioned above, the police rarely conduct detailed investigations anymore: they collect a statement or two, and make an arrest. In search and seizure cases, they list the evidence they find, and send the case to court; we refer to these as “bag-and-tag” cases. As a result of this limited follow-up, the preliminary hearing presented an opportunity to ask the questions that should have been asked in the first place, to properly understand the strengths and weaknesses of the government’s case in advance of trial. That benefits the Crown as much as the defence; and to the extent that issues are narrowed, unnecessary trials are avoided, and court time is saved, everyone benefits, including the taxpayer.

It will become clear over time that eliminating the preliminary hearing will not reduce court delays. But it will result in more wrongful convictions, and not the kind that can be corrected with a DNA test.

Cassandra Beaulac is an articling student and recent graduate of the University of Windsor Law School
Arun S. Maini is a criminal lawyer and former prosecutor with over 20 years of experience.

If you are facing criminal charges related to sexual assault, now, more than ever, you need an experienced and skilled lawyer to defend you. Call The Defence Group for a free consultation at 877-295-2830.