You Have a Right to Speak to a Lawyer. What Does That Mean? 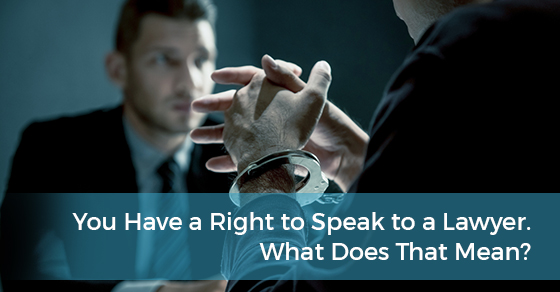 When I am arrested, who can I call? What does it mean to get my “one phone call”? How soon can I make that call? Can I use my own cellphone? What is “duty counsel”?

In January 2019, another impaired-driving case in Waterloo Region was dismissed because the police failed to provide the defendant with his “rights to counsel”.

In that case, 53-year-old man was pulled over by the Waterloo Regional Police.  He failed a roadside breath test and was charged with “over80” (being over the legal limit of alcohol in his blood).

But that wasn’t his only option, because police could have tried again or waited for his lawyer to call back. The trial judge determined that the accused’s “right to make meaningful choices about the exercise of his rights to counsel were breached.”  The evidence was excluded, and this killed the Crown’s case.

Section 10(b) of the Canadian Charter of Rights and Freedoms(“Charter”)provides that:

Everyone has the right on arrest of detention:

(a)   To be informed promptly of the reasons therefor;

(b)   To retain and instruct counsel without delay, and to be informed of that right; and

What important rights and obligations comprise an individual’s“rights to counsel”?

When Am I Allowed To Call a Lawyer?

You have the right to speak to a lawyer immediately upon being detained by police. Why? Because detained individuals are in immediate need of legal assistance.

At What Point Am I “Detained” by the Police?

You don’t get to call a lawyer unless you are “detained” by police. If you are not detained, you don’t get to call a lawyer. The point at which a routine stop or interaction with police becomes a detention is a legal question which often consumes a great deal of court time and results in many Charter challenges to police investigations. Basically, a detention arises when you are under “compulsion” and are not free to leave. The detention can be physical, such as when you are sitting in the back of a police cruiser or a police interrogation room, or psychological, such as when the police are talking to you on the street but you don’t feel like you can just walk away. Drawing the line can be difficult because there is a large grey area when it comes to interactions with police, and even experienced police officers have trouble sorting it out.

Why Should I Call a Lawyer?

The police are investigating and searching for evidence. You need to know your rights and your options. Should I cooperate or not? Should I talk to police to clarify the situation, or remain silent? If they offer me a drink, should I accept it or be wary?

A detainee has the right to be informed of the right to retain and instruct counsel “without delay”. This has been interpreted to mean “immediately”,because the courts have recognized that when you are detained by police, you are vulnerable to self-incrimination and the potential loss of liberty that comes with a criminal investigation.

But Sometimes “Immediately” is Impractical

Obviously, if the police are in the middle of a high-risk takedown, or attending to a traffic accident involving injuries, they might not be pulling out a cellphone and helping you dial a lawyer on the spot. There are limits to “immediately.”  These include:

What Are the Duties of the Police When it Comes to my Right to Counsel?

Police have a number of obligations.  They have a duty “to inform.”This means that the police must tell you what you are actually being arrested for, before telling you about your right to a lawyer. This is important to your choice about whether to speak to a lawyer. You might not wish to delay a DUI breath test to speak to a lawyer, but if the police are investigating a   fatality, you certainly should.

Police also have a duty to provide a reasonable opportunity to exercise counsel rights, and a duty to refrain from eliciting incriminating evidence from the detainee prior to exercising that right. In other words, you have to be given access to a telephone and your lawyer’s number, and time to make the call in private. Police will generally not let you use your own phone, because they want to make sure that you are not contacting anyone else, such as an accomplice.

What if I Choose Not to Speak to a Lawyer?

Detainees who “waive” their rights to counsel must at the time of the detention or arrest be capable of understanding that choice, and appreciating the consequences of waiving that right.  This is sometimes referred to as having an “operating mind.”There are lots of examples in case law where detainees have “waived” their rights to counsel, but these waivers have been determined not to be “valid.”

Here a list of examples where a section 10(b) waiver may be invalid:

Can I call my wife? My mom? A friend?

Nope. You can only call a lawyer.

How Often Can I Talk to My Lawyer From the Station?

Generally, police are only required to facilitate your rights to counsel once.  There are some exceptions to this. For example:

You Have the Right to be Informed of Legal Aid

Sometimes a detainee will not exercise the right to counsel because of concern about the costs associated with speaking with a lawyer. The courts have thus made it very clear that an arrested or detained person must be informed of the existence and availability of free legal aid and duty counsel services.

Police have a duty to inform the detainee if duty counsel and legal aid are available and give information concerning “whatever system for free and immediate, preliminary legal advice exists in the jurisdiction, if one exists, and how such advice can be accessed.”

No requirements exist for jurisdictions to maintain 24-hour access to duty counsel, although many do.  The police must provide basic information as to how to access the free legal advice that is available.

The right to retain counsel is not absolute and is subject to reasonable limitations.

Detainees must be diligent in exercising the right to counsel of choice.  If they are not, the running duties imposed on the police will be suspended. Diligence in the exercise of counsel rights will always depend upon the context.

“If the chosen lawyer is not immediately available, detainees have the right to refuse to speak with other counsel and to wait a reasonable amount of time for their lawyer of choice to respond.”  What amounts to a reasonable period of time depends on all of the circumstances, and may include factors “such as the seriousness of the charge and the urgency of the investigation.” If the chosen lawyer cannot be available within a reasonable period of time, the accused is to call another lawyer.  If they don’t, the police duty to hold off on questioning will be lifted.

In the Kitchener-Waterloo case mentioned at the beginning of this piece, the judge concluded that the “..failure (of the officers) to understand their informational obligations is a serious breach of a basic right which cannot be condoned by the court…given the vulnerability of any detainee, the right to counsel is a fundamental protection.  The importance of that protection should be known to all police officers.”

Because the consequences of what you say and do while in police custody can have such a significant impact on you, it is essential that you be aware of, and fully understand, your right to speak to a lawyer.

The right to counsel is a fundamental one. And unlike the right against unreasonable search, the right to privacy or bail or a trial without delay, there are fewer limitations on that right. That is why the “right to counsel” is often seen as one of the most valuable Charter rights, and the courts have in recent years emphasized over and over its primary importance.

When the vast power of the state is stacked against you, there is very little that you can do. So take advantage of the one thing that you can and should do at that moment: call a lawyer.

0 Comment
By Arun S. Maini
Read all 118 posts >
Arun S. Maini has practised criminal law since 1994. He graduated from the University of Toronto and Dalhousie University Law School. After articling, Mr. Maini joined the federal Department of Justice as a prosecutor, and later transferred to the provincial Crown Attorney’s Office, where he prosecuted all manner of criminal offences, from theft to murder. In 2003, Mr. Maini left the government to establish The Defence Group. He has prosecuted and defended hundreds of cases, and has extensive jury trial experience.