Uttering Threats: You Didn’t Have to “Mean It” 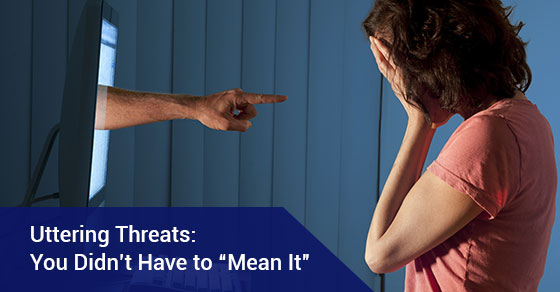 The online world is a battleground for threats and harassment. In November 2011, 15-year-old Rehtaeh Parsons committed suicide after she was allegedly sexually assaulted by four teenage boys at a party. The circulation of a digital photo of the sexual assault on social media prompted Rehtaeh’s death to make international headlines, prompted new legislation, and breathed new life into an unending debate about cyberbullying and threats made online.

The advent of Facebook, Instagram, Twitter and the multitude of various other social media platforms have demonstrated just how toxic the digital world can be for its online users. A recent Pew Research Centre survey suggests that as many as 40% of adult online users reported being harassed, and the recipient of online threats.

While the American criminal elements of uttering threats are different than its Canadian counterpart, the question of whether an uttered threat “should be taken seriously” remains at the heart of the issue of both the criminal justice system and public alike.

“Uttering Threats” is a criminal offence in Canada that is governed by section 264.1 (1) of the Criminal Code of Canada:

Everyone commits an offence who, in any manner, knowingly utters, conveys or causes any person to receive a threat

R. v. Jama determined the second of two essential elements to be that the mens rea (the “guilty mind” or intention) was the intention to threaten death. In R. v. Jama, the Crown was tasked with proving beyond a reasonable doubt that Ms. Jama meant the words she said to intimidate or be “taken seriously.” A subjective test, the Court must assess the Accused’s state of mind. The Court may consider the words uttered, and any and all other circumstances surrounding the uttering of the threat. In other words, the fault element of the offence of uttering a threat is made out if the Accused intended the words uttered or conveyed to intimidate or be taken seriously. In order to determine the Accused’s state of mind, the Court will often have to draw reasonable inferences from the words uttered, the circumstances surrounding the uttering of the words, including how the words were perceived by those subject to hearing them.

Canadian criminal law does not require the utterer of such a threat to be in the position or have the means of carrying out the threat. Canadian criminal law does however require proof of the individual who made the threat, and this isn’t always easy to determine or prove in the online world. Proving who was behind the keyboard is often difficult.

By Arun S. Maini
Read all 122 posts >
Arun S. Maini has practised criminal law since 1994. He graduated from the University of Toronto and Dalhousie University Law School. After articling, Mr. Maini joined the federal Department of Justice as a prosecutor, and later transferred to the provincial Crown Attorney’s Office, where he prosecuted all manner of criminal offences, from theft to murder. In 2003, Mr. Maini left the government to establish The Defence Group. He has prosecuted and defended hundreds of cases, and has extensive jury trial experience.