Impaired Operation of a Canoe: A Canadian Dui? 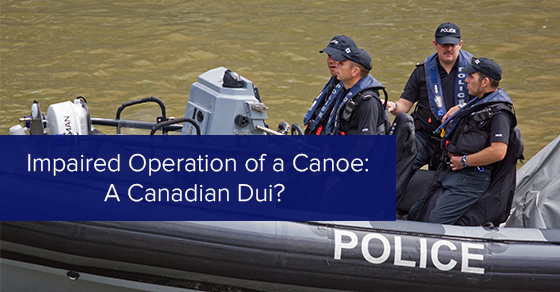 Beer, BBQ and boating: a trifecta of what summer in Canada means to so many of us.
But if you have a few too many before paddling away from the dock, are you committing a criminal offence?

Can you be charged with a DUI for operating a canoe while drunk?

When it comes to a motor vehicle, any vehicle propelled otherwise than by muscular power is considered a “motor vehicle” for the purposes of impaired driving laws. Each province has its own laws on this issue, and in Ontario, there are some motor vehicles that are specifically exempt, such as motorized snow vehicles and farm tractors. So you can drive drunk on a tractor or while snowmobiling in the woods, but not on an ATV or a golf cart.

A drunk bicycle rider is exempt, but e-bikes are not. Just because you don’t need a licence to drive one does not mean that the DUI laws do not apply to you: they do.

So that’s what a “motor vehicle” is, but what about a canoe? A kayak? A sailboat? A rowboat?

The authors of the recent Impaired Driving and Other Criminal Code Driving Offences (K. Jokinen and and P. Keen) set out a detailed and thought-provoking analysis of this issue.

Unlike for motor vehicles, the case of boats operated by muscle power alone is not so clear. A boat is not a motor vehicle: it is a “vessel”. A vessel is not defined in the Criminal Code, but it is defined in the Canada Shipping Act, basically as a watercraft that can be used for navigation. The method of propulsion does not matter.

So unlike a motor vehicle, where vehicles operated by muscle power alone are exempt, there is no such exemption for vessels. An exemption had in fact been proposed but was removed from the final legislation. Why? The authors of Impaired Driving suggest that it might be due to the fact that almost as many boating deaths occur in non-motorized watercraft as in motorized vessels, and impaired driving laws are all about safety.

The new impaired driving laws only came into force this past winter, and courts have not decided the issue yet about whether a canoe should be considered a vessel, because a drunk person in a canoe can be just as dangerous as one operating a motorboat. But now that summer is here, we may yet see cases being decided before long.

So now that summer is finally here, enjoy it, but drink – and paddle – responsibly!

For advice about the new DUI laws, or if you are facing criminal charges related to impaired driving, dangerous driving or leaving the scene of an accident (in a canoe or otherwise), call The Defence Group for a free consultation at 877-295-2830.

Arun S. Maini is a criminal lawyer and former prosecutor with over 20 years of experience. He likes to be out on Lake Huron in the summertime.

0 Comment
By Arun S. Maini
Read all 116 posts >
Arun S. Maini has practised criminal law since 1994. He graduated from the University of Toronto and Dalhousie University Law School. After articling, Mr. Maini joined the federal Department of Justice as a prosecutor, and later transferred to the provincial Crown Attorney’s Office, where he prosecuted all manner of criminal offences, from theft to murder. In 2003, Mr. Maini left the government to establish The Defence Group. He has prosecuted and defended hundreds of cases, and has extensive jury trial experience.